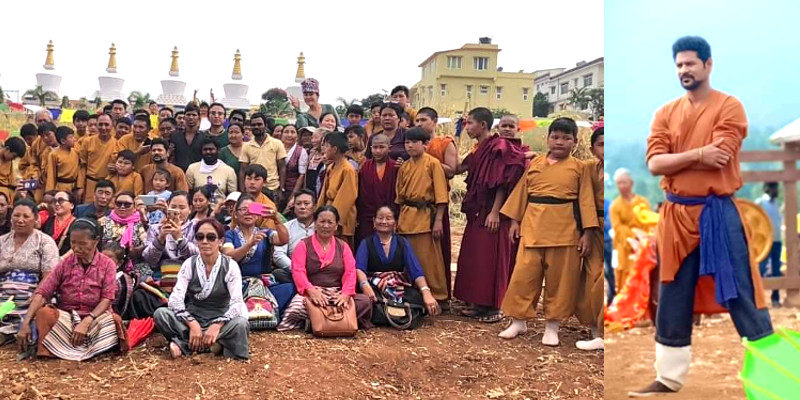 Well known Indian actor and director Prabhu Deva has made a short cameo at a Tibetan refugee settlement in south India. The director and actor has recently visited the Tibetan settlement in Kollegal near Mysore to shoot a clip for his upcoming. The short visit by the superstar was applauded by the local Tibetans as they also became a part of the movie!

According to the updates shared by the local Tibetans in the social media, the actor-director had  come to the Tibetan settlement in Kollegal to shoot a part of shaolin scene for his upcoming Tamil film where the Tibetans were casted as shaolin monks. During the short stay, the Tibetans were not only entertained by taking part in shooting for the film, they were also paid 500 rupees per day in addition to providing food.

Dhondenling Tibetan settlement, Kollegal, Karnataka settlement was established in 1974 with the help of the Government of India and Karnataka State. It is located at Odeyarpalaya, Kollegal Taluk in Karanataka State, Chamrajnagar district near Karnataka – Tamil Nadu border. The settlement is at a height of 3345 ft. above sea level and experience a moderate climatic condition. The average temperature of the place is about 20° Celsius and average annual rainfall of 140-170 cm per year. It is famous for nice weather and beautiful environment, popularly known among the Tibetans as Mini Swiss.

Kollegal Dhondenling is one of the five Tibetan settlements in the south Indian state of Karnataka. The settlement consists of 22 villages or refugee camps with average of 25-35 families in each camps with an overall population of around 4000 people.