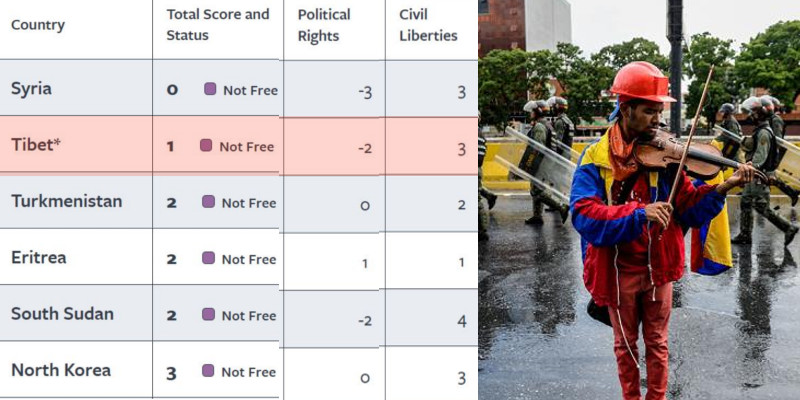 Tibet which is designated as a not free country in the annual report by Freedom House has a score of -2 out of 40 for political rights. The same report has a score just 3 points out of 60 for civil liberties. Amid tighter restrictions on passports for Tibetans, significantly fewer Tibetan pilgrims were able to travel to India to hear teachings of their spiritual leader His Holiness the Dalai Lama in exile.

Tibet is ruled by the Chinese Communist Party (CCP) government based in Beijing, with local decision-making power concentrated in the hands of Chinese party officials. Residents of both Chinese and Tibetan ethnicity are denied fundamental rights, but the authorities are especially rigorous in suppressing any signs of dissent among Tibetans, including manifestations of uniquely Tibetan religious belief and cultural identity. State policies encourage migration from other parts of China, reducing the ethnic Tibetan share of the population.

After more than sixty years of control over Tibet, the Chinese Communist Party’s ongoing campaign of cultural extermination in Xinjiang which is the product of decades of experience in persecuting ethnic and religious minorities, combining coercive measures and technological developments that were previously applied to Tibetans, Falun Gong practitioners, and others are highlights cited in the Freedom House report.

The latest edition of the annual global assessment of political rights and civil liberties revealed that 2019 was the 14th consecutive year of decline in global freedom. The report found that the established democracies are going in a downward trend while democracy and pluralism are under serious assault. 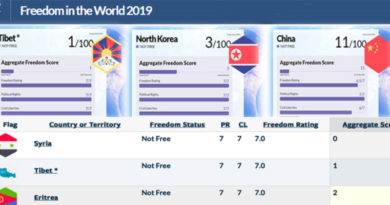 Tibet Ranked Worst Freedom in the World 2019 With Syria