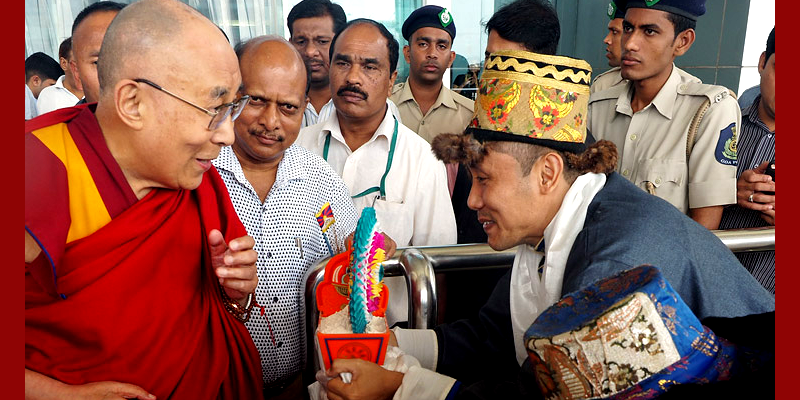 The Tibetan spiritual leader His Holiness the Dalai Lama on Tuesday afternoon after spending two days in New Delhi upon arrival from a one month visit to Ladakh region arrived in Goa. Members of the Tibetan community presented a traditional welcome to His Holiness on his arrival at the airport in Dabolim, Goa, from where he drove to the Grand Hyatt hotel there.

The Tibetan spiritual leader was also welcomed upon his arrival at Dabolim Airport by the Director of the Goa Institute of Management, Ajit Parulekar and the Chairman of the Board, Ashok Chandra and a local MLA. Upon arrival at the airport, His Holiness drove to the Grand Hyatt Hotel.

His Holiness the Dalai Lama will be visiting Goa Institute of Management (GIM) at the institute’s campus in Sakhali on Wednesday. His Holiness’s visit to the state will mark the 25th year anniversary of the institute and he will be speaking on the importance of traditional Indian knowledge in modern time at the B School’s Silver Jubilee Celebrations.