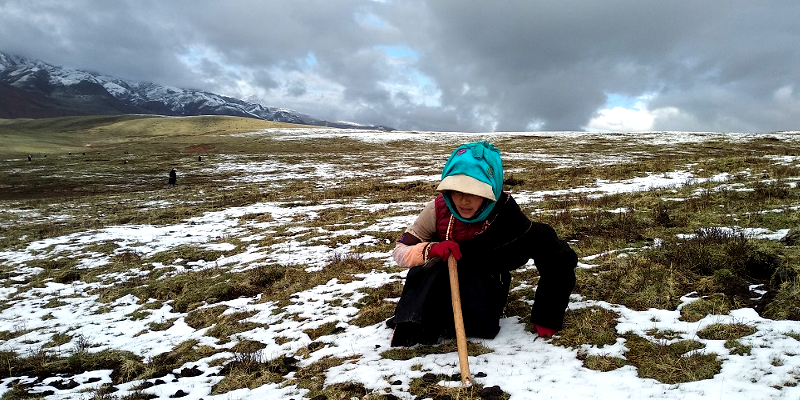 Tibetans inside Tibet especially in the Qinghai province and the Tibet Autonomous Region, come the month of May and the rush to set out for harvest the rare and highly priced caterpillar fungus or locally well known as ‘Yartzagunbu’ is a regular routine for the local Tibetans in the region. However, it is also worrying to note that the medicinal crop may be running out!

Many Tibetans previously nomads are now resettled into towns through China’s forced resettlement policies imposed upon Tibetan nomads. This change in life style has led to the Tibetans depending completely on harvesting of the seasonal ‘Yartzagunbu’ from their surrounding Qinghai-Tibet plateau for their livelihood. Besides the search for this harvest is sought after by people from all walks of life during the season.

“Collecting these organisms accounted for about 20% to 30% of household income for rural Tibetans in the 1990s. Due to the booming market and high prices, since the early 2000s it has become the dominant, or even only, income source for people in Zaduo and elsewhere on the grassland.” a local culture expert explains.

While the fungus has brought profit to Tibetans but a growing dependence on it has sparked violent confrontations between rival collectors as well as heavy influx of outsiders during the harvest period has provoked deadly conflicts. Besides, as the local Tibetans become increasingly dependent on collecting Yartzagunbu, the quantity of the harvest has decreased significantly.

Caterpillar fungus which has become one of the most expensive medicines in the world with a current local market price of up to 300,000 yuan (USD 46,900) per kilogram for the highest quality gathers price higher than gold when sold in Chinese market. However due to climate changes and impacts of global warming such as less snow in winter, an earlier snow melt in spring and overall warming, are causing in a decline of the fungus availability.