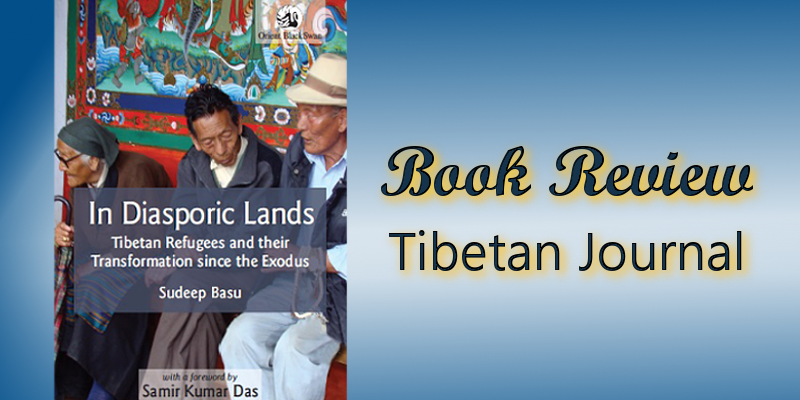 “In Diasporic Lands: Tibetan Refugees and their Transformation since the Exodus”, a book by Sudeep Basu, an Assistant Professor at the Centre for Studies in Social Management, School of Social Sciences, Central University of Gujarat, Gandhinagar is based on the author’s ethnographic fieldwork conducted in Darjeeling town, West Bengal dealing with Tibetan refugee’s emergent culture in the midst of a foreign host’s setting.

“A large number of Tibetans migrated to India following the Chinese occupation of Tibet in 1950. Till the end of the twentieth century, Tibetan studies focused primarily on Buddhism and pre-1950s Tibetan history in relation to Tibetan exiles, influenced largely by Western notions of Tibetan culture in an exotic ‘Shangri-La’. In Diasporic Lands moves away from this norm to study the dynamics of Tibetan refugees’ emergent culture in the midst of their hosts, and in distinctly urban settings.” explains the introduction of the book.

As the foreword in the book by Samir Kumar Das, Basu’s book offers a welcome relief to exploring a way to understand the phenomenon of the circulatory of forced migration in contrary to the tools and concepts used in the post-war era. It also added that the particular study of the Tibetans living in a protracted state of homelessness impels Tibetans to turn the outside into a home while the reconstruction also gave birth to many ‘Tibetanness’ identity reflective of the differences in locales in which the process takes place.

The introductory part also explains that based on the author’s ethnographic fieldwork conducted in Darjeeling town, West Bengal, this book looks at how places and identities are redefined and transformed by refugees negotiating their ‘belonging’ in an alien country over time. The earlier strategy of the ‘myth of return’ to their homeland has had to be reworked, and in the process, Tibetan refugees have moved away from the stereotyped ways in which they are portrayed to create plural identities of their own. The volume also looks at how the refugee–host dynamic—where the ‘hosts’ are Indians, Nepalis and ‘Bhutia’ Tibetans—plays out in such a situation

Based on the thoroughly researched content of the book with special regard to the particular case of the Tibetan refugees in India, it can suggested that the book will be of special interest to students, scholars, policy makers or politicians alike, lawyers, human rights activists. Especially, since the book puts out ground narratives in contrary to the formal discourses, it will serve as a step in realistic understand of the Tibetan refugees evolution in exile.

In Diasporic Lands: Tibetan Refugees and their Transformation since the Exodus is book that contains 243 pages as a whole and it is published by Orient Blackswan whose head office is registered in Hyderabad.

One thought on “‘In Diasporic Lands’, A Book on Tibetan Refugees in India”