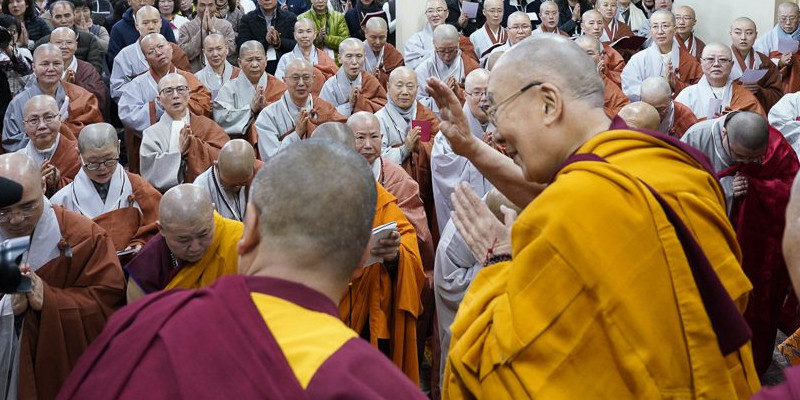 The Tibetan spiritual leader His Holiness the Dalai Lama on Monday began three days teaching at the request of Korean devotees. With than 6000 audience packed at the Main Temple in McLeod Ganj, His Holiness greeted them and gave an introduction to the day’s program. The first day of ‘Heart Sutra’ teachings discussed mainly about the importance of philosophical logic in Buddhism.

“You Koreans have come again to listen to teachings and I thought we could look at the ‘Heart Sutra’, which is both simple and difficult,” His Holiness the Dalai Lama began the teachings, “Today, since we have three days, I’ll give an introduction to the teachings and I’ll see if we can begin the ‘Heart Sutra’. Tomorrow, I’ll also explain the ‘Three Principal Aspects of the Path’, which is short and has been translated into Korean.”

According to the official website of the Office of His Holiness the Dalai Lama, it report that His Holiness explained that the Buddha advised his followers not to accept what he taught blindly, but to examine and test it. Buddha said if it is not corroborated by reason, don’t accept it, but look again. Because of Buddhism’s use of logic and its profound philosophical approach, Buddhist students can have constructive conversations with modern scientists. Many of them appreciate the Buddhist notion of dependent arising. Others are struck by Buddhist understanding of the workings of mind and the emotions.

His Holiness took up the text of the ‘Heart Sutra’. He explained that the Buddha gave three rounds of teaching, referred to as turnings of the wheel of dharma. The Pali tradition is based on the first round and includes the three scriptural collections, as well as the strict observance of Vinaya—monastic discipline, added the report.

After explaining about the three rounds of teachings by Buddha, he stopped the teaching for the day. He told the congregation that Samdhong Rinpoché would conduct a review of the day’s instruction and urged them not to hold back from asking him questions.