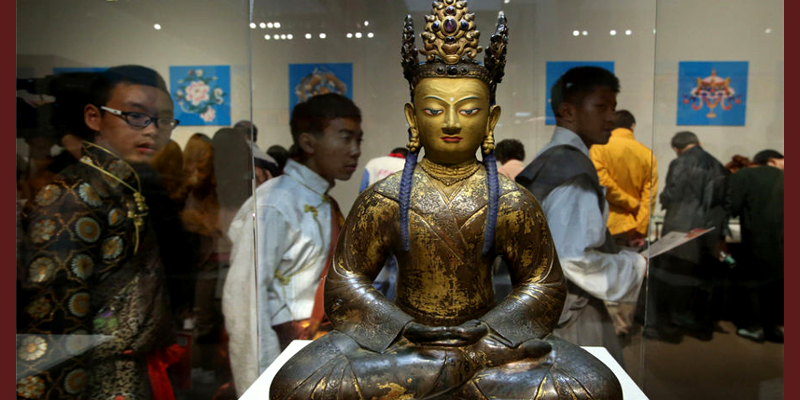 The Chinese government will be putting on exhibition a collection of 185 cultural relics from Tibet at the Capital Museum in Beijing at February’s end. These cultural relics have all been retrieved from temples and monasteries which were seized or razed to the ground seemingly during the Chinese invasion of Tibet.

State media Xinhua reported that the antiques come from 13 cultural relics protection sites which include the Jokhang Temple, Sakya, Shalu and Mindroling monasteries, all reverentially important for Tibetan Buddhists. Many of the antiques have never been seen by the public, reported the Xinhua.

Passang Norbu, talking to the Xinhua, said that this display would be the largest in recent years. “This will be the largest, highest-level exhibition of Tibetan cultural relics in years,” he said.

The Xinhua reported that five of the most precious antiques include a gold mask and silk fabrics from Tibet’s Ngari Prefecture. However, staffs of the museum have kept the complete list of the Tibetan antiques secret and have only revealed the most important ones. “Apart from heavy guard, our museum will control the temperature and humidity for each antique to ensure they don’t suffer any minor damage after leaving Tibet,” Capital Museum’s Liu Cheng told the press.

The exhibition, touted to be the biggest in recent times, will be in operation for a month.

During the Chinese invasion of Tibet in 1959 and the subsequent demolition of Buddhist sites, many Buddhist relics and murals have either been razed to the ground or have been stolen by officials. Hidden footages of the invasion reveal how monasteries were destroyed with dynamites and machine guns.