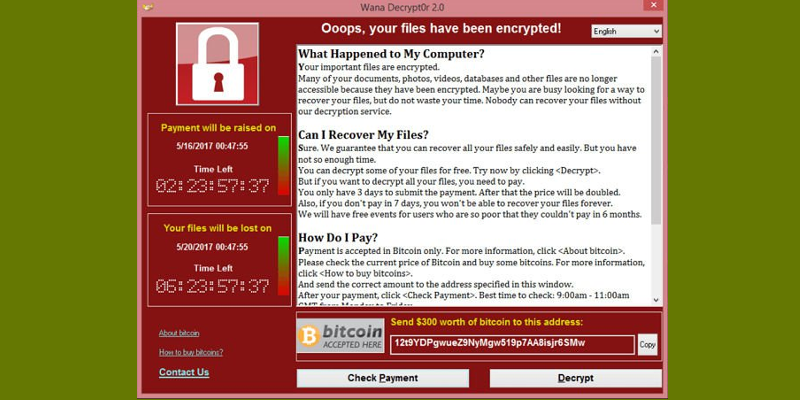 Ransomware is a type of malicious software that carries out an attack on a computing system that blocks access to data stored in the system until a ransom is paid according to the instruction displayed by the attack. This attack is carried out by making the user to download a malicious software to a device in the network. The hackers launch the attack following the download and it locks all the files it can find within the network of the device.

Wanna Decryptor, also known as WannaCry or wcry, is a specific ransomware program that locks all the data on a computer system and leaves the user with only two files: instructions on what to do next and the Wanna Decryptor program itself according to the Telegraph.

The wcry when opened tells the user that its files have been encrypted and the gives a gives days to pay a ransom to unlock the file. The attackers will demand the payment of the ransom in the form of bitcoins, which the wcry instructs the user clearly how to do that way.

The WannaCry is said to have used a flaw in the Microsoft’s software to hack the computing devices running the software.

How to Protect Yourself:

The ransomware attack is known have demanded amount ranging from £400 to £600 in the past. The ransomware cyber attack that broke out on last Friday has affected over 200,000 organizations across 150 countries according to the Telegraph. A security expert managed to stop the attack by triggering a “kill switch” on Saturday but it has continued to wreak havoc said the report.